Imagine this–you’re walking back to your hotel or apartment on one of those famous white nights of St. Petersburg where it never quite gets dark. Your visa-free St. Petersburg trip has been great so far. The city is beautiful, the weather is perfect, but you’re looking to get some well-deserved sleep after a long day of sightseeing. The only problem is, the way to your accommodation seems to be blocked! By what? Well, it’s a section of road, raised almost vertically right in front of your face.

Congratulations–you’ve come face-to-face with one of St. Petersburg’s famous drawbridges. Almost every night from May to November, 9 to 12 bridges are raised to allow passage of cargo ships from the river Neva to the Gulf of Finland. Some people think this is only for show–to make tourists happy. Not so! There is a real and practical reason to raise St. Petersburg’s drawbridges.

These bridges are unique in the world. Nowhere else is there such a number of bridges that are raised daily. They are truly one of St. Petersburg’s great calling cards.

There are a couple of ways to best experience the drawing of the bridges on your visa-free St. Petersburg trip.

The first is to watch from a point on the Palace embankment between the Palace and Troitsky (in English – Trinity) Bridges. These two are probably the most famous and popular of the drawbridges in St. Petersburg. Many people try to see the Palace Bridge drawn up and close, then try to rush to the Troitsky Bridge. But it’s too far away to get there in the time between when the Palace Bridge finishes rising and when the Troitsky starts. Instead, you can park yourself halfway on the Palace embankment in a place where you have a good view of both bridges and enjoy the show without rushing.

Another good viewing spot for the raising of the Palace Bridge is on the “opposite shore,” on the University embankment or on the Spit of Vasilievsky Island.

Who says you have to watch from dry land? Boat trips are available and seeing one of St. Petersburg’s bridges rise from underneath it is an experience unlike any other.

Regardless of what you choose to do on your visa-free St. Petersburg experience, don’t miss out on the raising of these majestic drawbridges! The good thing is that you can witness it from April to November– just over half of the year! 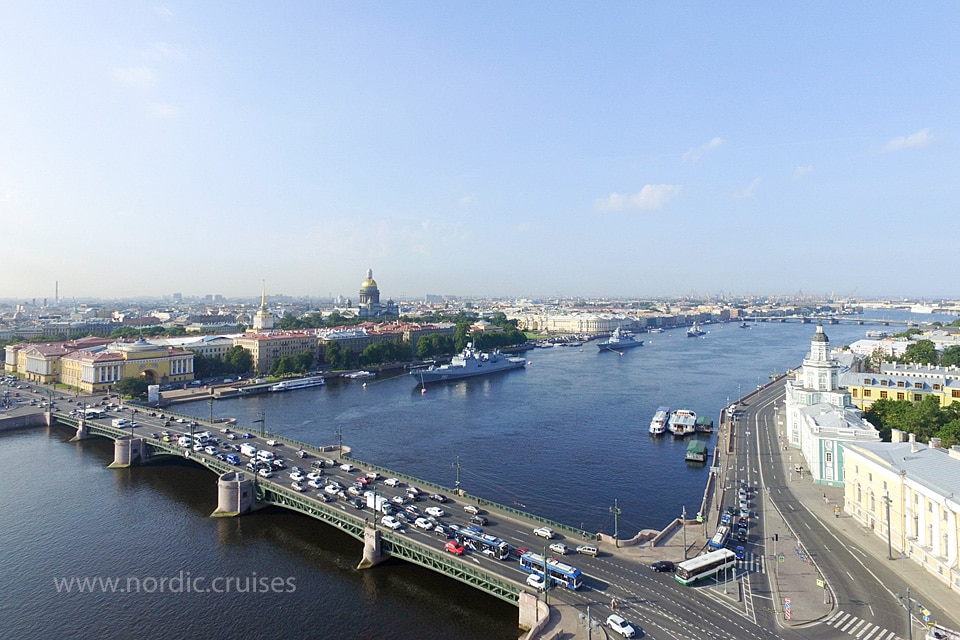 With 342 bridges in the grand city of St. Petersburg, it is almost impossible to move through the streets without crossing a bridge. When your visa free St. Petersburg Cruise docks, pay attention to which side of the Neva River you step down upon! According to a set schedule, thirteen of the more sizable bridges are raised nightly for a few hours to let large boats pass; there is no way for cars or pedestrians to travel across the water. Be sure to check the timetable!

The bridges of St. Petersburg range from picturesque and modest to beautiful and majestic feats of engineering. Look at some superb examples:

On the Neva River

The Palace Bridge is one of the most famous bridges to vault over the Neva River. Dazzling pictures of this bridge grace the albums of every tourist who comes on our visa free St. Petersburg Cruise. The lion sculptures, elaborate railings, and pavilions are an iconic part of the cityscape. Set between Winter Palace and the historic landmarks of Vasilevsky Island, the height of the Palace Bridge was designed to ensure a clear view of the surrounding monuments. Over 30,000 cars traverse this bridge daily, and it is the site of massive traffic jams.

Opened in 1903, the Art Nouveau style Trinity Bridge is elegant and opulent. It features curving cast-iron beams, sculptural streetlamps, and granite obelisks that support two-headed imperial eagles. The name of this bridge pays homage to the Trinity Cathedral, which once stood on the Petrograd side of the river.

On the Fontanka River

Built on Nevsky Prospekt, the Anichkov Bridge is best known for the bronze-cast Horse Tamers sculptures that crown all four corners of the structure. A close gaze at the railings will reveal fantastical decorations, such as seahorses and mermaids. 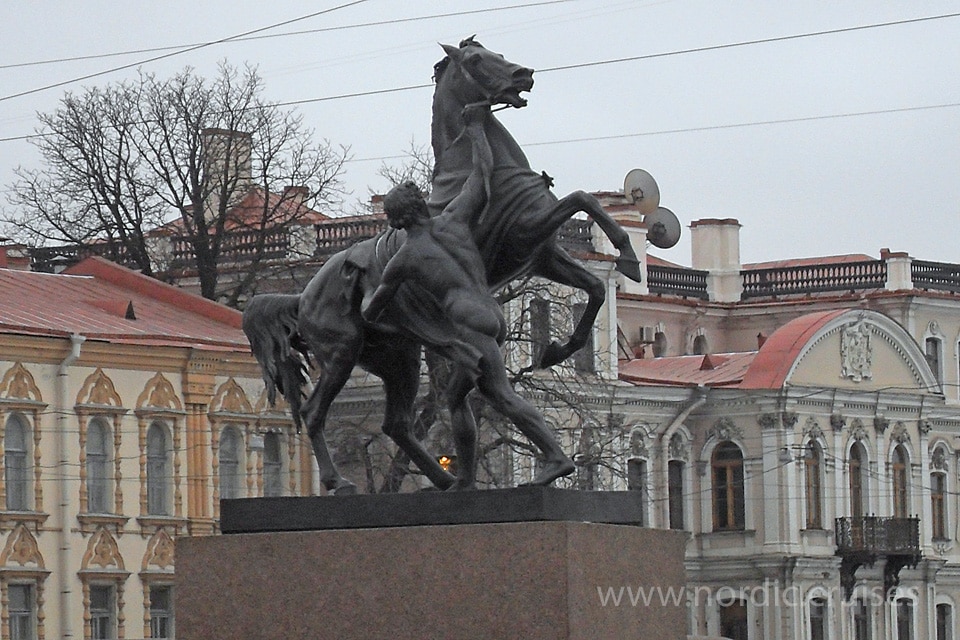 As you tour Nevsky Prospekt as a part of your visa free St. Petersburg cruise itinerary, it is worthwhile to detour about 300 meters south to view the Lomonosov Bridge, named after the accomplished Russian scholar. This bridge no longer opens for passing sea vessels, yet the delightful Doric pavilions that used to contain the drawbridge controls remain, creating its unique and distinctive silhouette.

On the Winter Canal

The Hermitage Bridge arches over water as the oldest and smallest stone bridge in St. Petersburg – in lovely contrast with the awesome architecture of the bridges already mentioned. Built originally as a wooden drawbridge, this charming structure was rebuilt in 1760 from limestone and brick with a granite façade. As a hallmark in the Hermitage and Winter Palace district, the quaint Hermitage Bridge is a popular focus in countless postcards of St. Petersburg. Take a moment during your visa free St. Petersburg cruise to appreciate the classic view of the Hermitage Bridge from nearby Millionnaya Street. 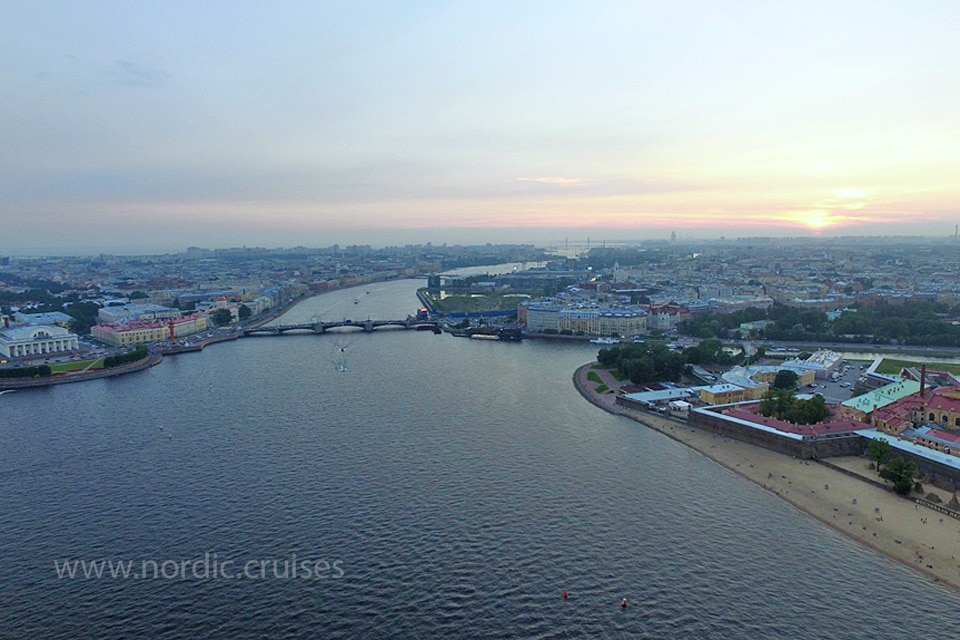 The residents of St. Petersburg, Russia, lovingly refer to their city as a “naval capital, but with a river mentality”. Most visitors who travel to St. Petersburg, Russia visa free perspectives often expect a wondrous view of the Baltic Sea. The reality is, however, that although St. Petersburg does lie by the sea, you’ll more than likely get caught in the maze of industrial areas before you get to it.

When Peter the Great founded St. Petersburg in 1703, oddly, the city’s construction was directed away from the sea, not towards it. Yet, Peter provided every noble person who relocated to St. Petersburg with a boat, under one stipulation – they were to use it to sail along the city’s rivers. The nobles, however, chose to ignore Peter’s request.

Russian author Andrey Astvatsaturov observed that literature stemming from St. Petersburg rarely references the sea. In fact, it’s hard to even find any information regarding St. Petersburg’s naval heroes. Astvatsaturov feels that the reason for this is that there is not much to say about the sea. It lies dormant – not stormy and fierce, like other seas. With its 60 embankments, St. Petersburg is seven percent water. The total length of its rivers and passages is 28 kilometers.

Reporter Pavel Nikiforov delved into the history of the thousands of wooden pillars along the shores of St. Petersburg. He discovered that everyone who owned a dwelling on the sea was required to fortify the shore with as many pillars as possible, per an order which was signed by Peter the Great in 1715. Knowing the facts about these pillars makes it easier to understand them, as many visitors travel to St. Petersburg just to see them.

It’s a bit surprising to know that St. Petersburg is where yachting all began. The world’s first yacht club, known as “Nevskaya poteshnaya flotiliya” on the Neva River, was also founded by Peter the Great. World-renowned yacht captain, Sergey Timoshkov, is a direct descendant of those first historical yachting captains.

When you travel to St. Petersburg, Russia visa free, you may choose to visit the sandy desert area of Neva River.  In the distance, you can see the port, and possibly a cruise ship or two. Newer apartment complexes are slowly blocking the view. Possibly the only remaining reminders will be those found in St. Petersburg’s crest, which features two anchors – one a river anchor, the other, a sea anchor. 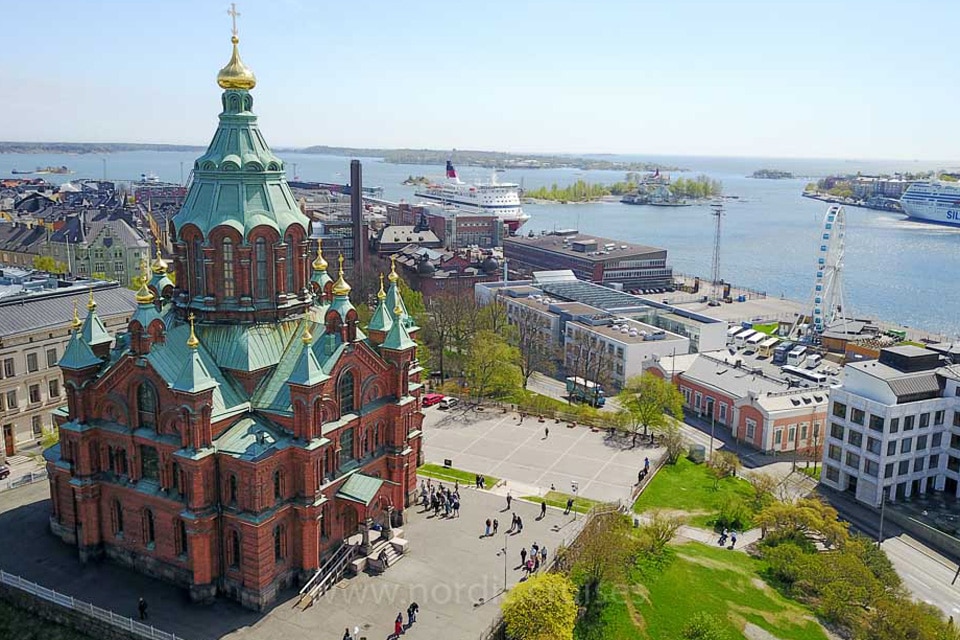